Looking for the best social media marketing campaigns in Bristol this year? You found 'em! A hub for creative and digital industries, lots of Bristol-based businesses have created some really enviable and engaging content this year which deserves shouting about. So, here's Noisy Little Monkey's pick of the best social campaigns in Bristol from 2018...

Creating controversy and putting a million pounds worth of sales on the line would be a huge risk for any marketing team, but Boston Tea Party - the South-West’s go-to coffee chain - rose to the challenge. In their mission to go green, they announced on April 24th that, by June 1st, all single-use cups would be banned, which caused quite a stir on social media.

There was a large amount of praise for Boston Tea Party's initiative, but there was also a significant amount of backlash. Why? Abandoning single-use would mean customers would have to carry around a keep cup or use Boston Tea Party's loan cup scheme in order to purchase a hot drink, which left some customers a little annoyed. Disgruntled customers aside, this is a great example of a social media campaign which not only increased brand awareness but also sparked a thoughtful discussion on something that many of us might have never thought twice about.

Was the #NoExcuseForSingleUse campaign successful? After just one month over 17,500 takeaway cups were prevented from heading to a landfill, 7,000 Ecoffee cups were sold in Boston Tea Party cafes alone and over £1,750 was raised for charity. After six months of running the campaign, it was announced that Boston Tea Party had prevented over 81,500 disposable cups from entering landfill (which is the equivalent of filling an articulated lorry with cups!). They also raised over £8,100 for charitable causes, such as Plymouth Beach Clean. 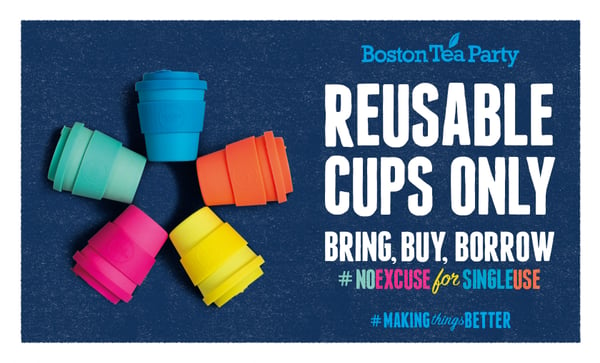 Six months on from their ambitious project, Boston Tea Party has seen sales of their takeaway drinks fall by 24%. However, this is a long-term investment which has allowed Boston Tea Party to establish themselves as an industry leader in the battle against climate change. Their #NoExcuseForSingleUse campaign acts as a fantastic example of what can be achieved if big brands take more responsibility in the welfare of our planet.

Crack Magazine - Creative Use Of AR

Bristol alternative music publication Crack Magazine announced on their Instagram story (a salient form of social sharing) that electronic musician Aphex Twin would star in an augmented reality cover. This meant readers could pick up a copy and, using the Crack Magazine app, bring the interactive cover to life using AR technology.

This was not only a clever way for the magazine to shift copies (although the publication is free to pick up from independent shops, cafes and bars around the UK), but also for the team to promote their brand new app, the release of which coincided with Issue 94’s availability worldwide.

To raise brand awareness outside of Bristol, a billboard of the cover was installed near Cambridge Heath station in East London which has the same interactivity as the physical copy of the magazine. The installation of the billboard to the finished product was chronicled on social media, persuading people to come and visit it and play with AR. This is a brilliant example of utilising key digital trends as part of your digital marketing strategy.

Bristol is a well-known hotspot for tech and digital industries and so it only makes sense that the city would host its own version of Social Media Week: an event held in major cities across the globe. The Bristol version of the week-long celebration is the only other Social Media Week in the UK outside of London. It was created by Ambitious PR who were hired by Bristol Media to come up with a way to promote the city’s creative media sector. 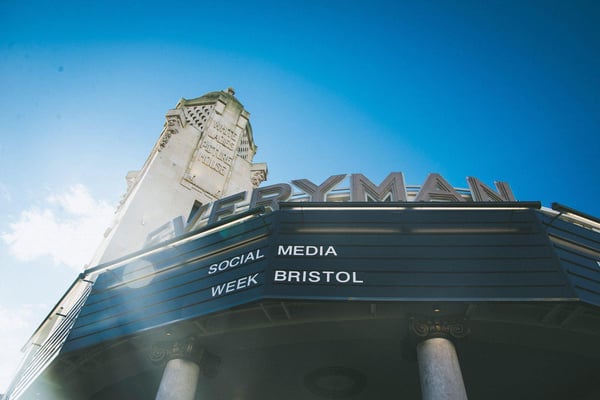 The event exceeded expectations: over 1,500 delegates attended the week-long festival with events, workshops and seminars lead by high-profile speakers from huge names like Facebook, Buzzfeed, Twitter and Yahoo.

Here we go - we're up bright and early for the second day of #SMWBristol Round 2 at @EngineShed_BB! Looking forward to sessions with @OriginWorkspace, @Search_Star, @noblestudios and @truedigital. Use #SMWBristol to join the conversation if you're attending an event today! pic.twitter.com/yGgbso8mro

Social Media Week Bristol was well-engaged with on social media (if it wasn't, that would be an unfortunate and ironic turn of events!). Their hashtag - #SMWBristol - trended on Twitter and Ambitious PR even won 'Best Event of the Year' at the DARE Awards hosted by the Public Relations and Communication Association. The good news is that #SMWBristol will be returning in June 2019!

The Grand Appeal - Creating A Community

Taking sculpture trails to a whole new level, Gromit Unleashed 2 was the 2018 sequel to the original 2013 treasure hunt which saw unique and original Gromit-shaped sculptures scattered across Bristol. This time around, The Grand Appeal - the Wallace & Gromit-endorsed Bristol Children’s Hospital charity - also featured Wallace and Feathers McGraw as part of the hunt.

The trail featured over 60 giant sculptures of Aardman’s beloved characters dotted across the Bristol area in iconic locations such as Ashton Court Estate, the Clifton Suspension Bridge and on the doorstep of the University of Bristol’s Wills Memorial Building. These multi-coloured sculptures were designed by high-profile artists, designers and innovators as well as local talent.

To promote the activity, The Grand Appeal utilised digital media; punters could find all the figures on a dedicated app. Over a few months, the campaign featured a #SculptureOfTheDay on Instagram and shared snaps from those who followed the trail, which encouraged a significant amount of engagement.

I have had an amazing time doing the @thegrandappeal trail. This was my first ever visit to Bristol and I absolutely loved it. I cannot wait to come back again. pic.twitter.com/9GisybKUaO

When the trail closed, 66 of the sculptures went under the hammer in aid of Bristol Children’s Hospital and St Michael’s Neonatal Intensive Care Unit, raising over £1.3 million for the medical organisations. The campaign was a fantastic way to heighten Aardman’s profile, draw tourists to Bristol and raise money for important causes. Bravo, The Grand Appeal!

The Florist - Park Street’s premier cocktail bar - displayed a masterclass in how to create a buzz around a new drinks destination. By nailing their target audience (image-conscious millennials and Gen-Zs who love Instagrammable opportunities), they were able to create a storm of anticipation before The Florist even opened.

Work began in February 2018 on a mural on a blank wall above Vincenzo’s Pizzeria. By creating something beautiful that people of all ages would share on social media, the bar were able to establish curiosity and mystery as well as get a fair amount of publicity via those who posted about the artwork, especially as it was painted live for the people of Park Street to see.

Jody Thomas working on a mural for The Florist, a new restaurant on Park Street, Bristol. pic.twitter.com/VZ2kN2KV9a

Prior to their grand opening, The Florist invited influencers and other prominent figures in the blogging and Instagram scenes to visit the bar before the general public had the chance. This meant that influencers could share the bar’s enchanting interiors and aesthetically pleasing cocktails with their followers, providing The Florist with free promotion and outreach for as little as the price of providing a few drinks!

A quick look at The Florist's Instagram shows that social media is integral to the brand’s marketing strategy: a look at their geotag sees thousands of posts uploaded to Instagram, with plenty of guests eager to share their experience in the floral wonderland. 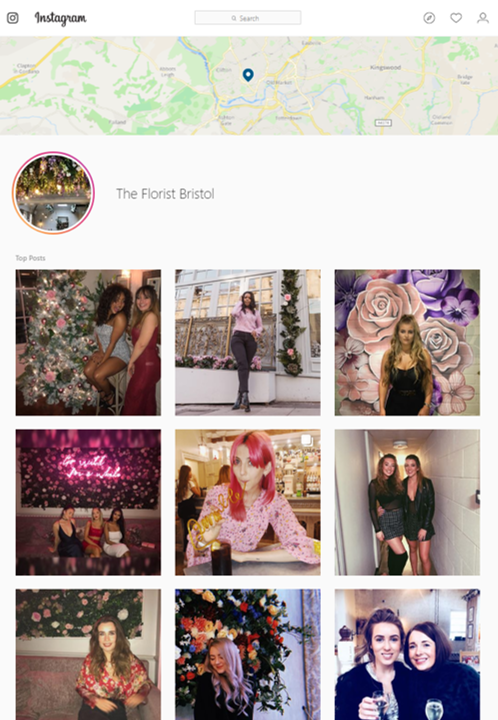 Having started in Bristol, Pieminster and their quirky pies have been a runaway success, securing themselves as the world’s leading gourmet pie brand. With eccentric twists on traditional pies (paneer, anyone?), they’ve set up shop across the country, expanding into trendy urban centers like London, Manchester and Nottingham.

The aspect of their social media strategy which stands out the most are their special promotions, most of which are topically themed. If you already have something like, say, Black Friday in your consciousness, then something relevant (Black Pieday) but still unique (a black coloured pie, sold in aid of charity) will catch your eye as you’re scrolling through your social feed.

Other universal events and holidays Pieminister has engaged with include Halloween and the World Cup, but they’ve also formed their own festivities (such as British Pie Week) as well as promoted specially themed pies and great deals - most of which their audience can discover through Pieminister's bright and colourful social media platforms.

So that’s it: Noisy Little Monkey’s favourite Bristol social media campaigns of 2018 - a real testament to the digital creativity of our city! What’s the most sensational social you’ve seen this year? After this, you'll definitely feel inspired to supersize your social media in 2019. 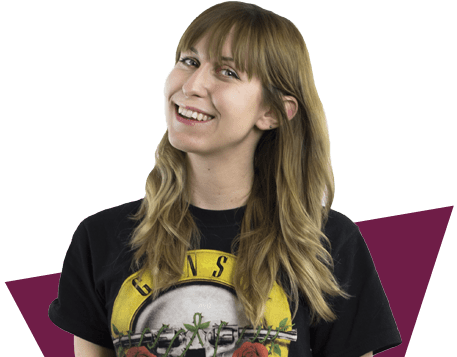