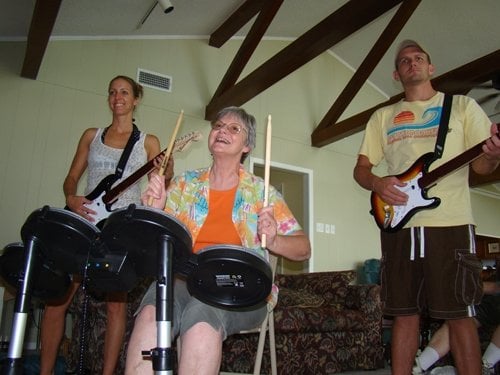 Most of the people who know me will know that I've not been in the office much lately due to the sudden and unexpected death of my Mum, Marilyn.

Today is her funeral and is the right time to share what she did for Noisy Little Monkey. 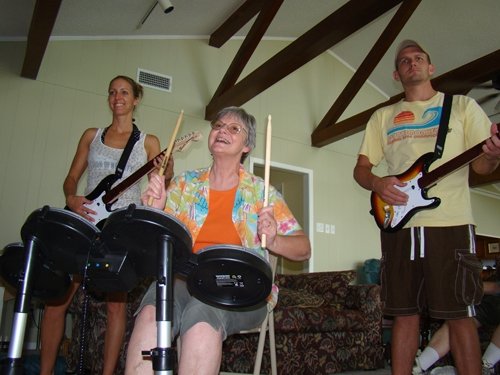 She came up with the name Noisy Little Monkey

We used to be called The Web Consultancy which I came up with in about 2 minutes when I thought, ‘I’ll do this for a couple of months, until I can find a proper job’. Then as the business grew we needed to get a bit more serious on the legal / tax side so it needed to become a limited company.

Mum and Dad were living in the USA at the time and over a Skype one day, I told Mum that sometimes it felt like the client would wind me up and I’d make a lot of noise online on their behalf to help them climb the rankings. I also told her that when I had a huge spreadsheet full of potential keywords during our keyword research phase, it reminded me of the thought experiment she used to talk about. If you had an infinite amount of time, an infinite amount of monkeys sat in front of an infinite amount of typewriters, then at some point one of them would type the complete works of Shakespeare, word for word, in order. “I could use that infinite number of monkeys” I said, “Excel just doesn't cut it, my eyes hurt and I have keyword blindness.”

“We just need a new name, but I don’t want to go for something boring this time” I sighed.

We discussed how I was like one of those ugly wind up monkeys with the cymbals… Same manic eyes, same strange grin.

She gave me a love of the English language

I hated reading books. HATED books. Hated school. HATED IT! Mum kept trying to get me to read, taking me to libraries, where I refused everything proffered except the wonderful Asterix. She encouraged my addiction to 2000AD even though it wasn't really for kids my age. Normal books though, they really didn't do it for me. Except for a couple. Spike Milligan’s “Silly Verse for Kids” is a book that I adore. I can’t help but type these two, to get you introduced to Spike’s poems…

There are holes in the sky where the rain comes in,
The holes are small, that’s why rain is thin.

Was there a cure? “The higher the fewer”
The learned doctor said
Then he turned poor Maverick inside out
And stood him on his head

“Just as I thought! You've been and caught
The Asiatic Flu
You mustn't go near dogs I fear
Unless they come near you”

Maverick cried, he went cross eyed
His legs turned green and blue
The doctor hit him with a club
And charged him one and two

And so my friend, this is the end
A warning to the few
Steer clear of doctors to the end
Or they’ll get rid of you.

BRILLIANT! I just wrote it there from memory. A poem about farting… The best way to get little boys to read. If you have kids, go buy that book.

Mum passed on her love of the gently macabre (by day she was a lab technician cutting up brains, injecting urine into frogs, sucking up blood in an old fashioned pipette and often having to spit it out as she sucked too hard and long) through the wonderful book Struwwelpeter – which had tales of the Red Legged Scissor Man (he cut off the thumbs of children who sucked them) Harriet and The Matches (she burned herself to death).

Mum would recite these poems, great chunks of Shakespeare (embarrassingly loudly and with lots of waving arms, in front of my mates, who loved it), bible verses and rhymes she’d come up with on the spur of the moment.

OK, so maybe because I don’t know my adjective from my split infinitives (as I say, I hated school) but I do know that you shouldn't write about a “blue babies bonnet”, the phrase Mum repeated like a mantra to make sure I got my grammar right. Without this love of words and wordplay, I’d never have been so excited to write for others and do it well.

They’re also my Dad’s values too, so he deserves some of the credit! Be open, honest and transparent about stuff. If you have bad news to deliver or need to own up to something, do it. Be honest and apologise if necessary… Pay for any damage if that’s the right thing to do but most of all, leave ‘em smiling.

I know lots of businesses pay lip service to those sort of ethics, but I'm fortunate enough to have a team here who make sure we stick to the straight and narrow. Plus, when I'm considering the easy (but wrong) path, there’s a looping video of Mum in my mind’s eye saying “We all have to do things we don’t want to do, Jonny. Come on, it’s better to do the right thing, even if it is lots harder.”

And, Josh has just reminded me that she recommended we give him a chance and a job. A bit rudderless at the time, Josh had dropped out of Uni (twice) and was kind of pissed at the world. I was saying, "He sounds like a feckless berk and needs to sort his life out". Mum said, "Come on, everyone needs a start. You should give him a go". She was right. Josh writes funny, award winning blogs and makes our clients happy when he's on their projects. Nice one Mum!

Mum was our first receptionist and our first telemarketer

At the age of 68 when she should have been relaxing and going on cruises with my Dad (they didn't, more about that below), we’d transfer the office phones to her house if we were all in meetings or on client’s sites. And when we thought we’d go and target the architectural sector (we didn't, in the end) she went through the phone book, called up and got named contacts and job titles at most of the big firms in the UK. At 68 she was doing that… refusing payment and saying it gave her something to do.

In the last few years of her life, Mum suffered from manic depression, followed by depression. Her anxiety about leaving the house became such that she rarely did… but to keep her active Dad and her decided to have Nicola and I around every Thursday evening. Mum was never the world’s best cook and that foul disease robbed her further of her confidence so all she felt able to cook was Shepherd’s Pie. So, Thursdays became known as “Shepherd’s Pie Night” and then “SPN”.

Google Now picked up on this and would begin to give me reminders at around 5PM on Thursday that it would take 1hr 15mins to get to “Mum’s”. In training sessions, I would show people how this had never gone in my diary, but Google had picked up on the fact that every Thursday I’d arrive at the place labelled “Mum’s” on my Google Maps so it gave me a push reminder.

People would be amazed / horrified by this intrusion… Maybe rightly. I’d say, “Don’t worry – we have nothing to fear until it starts calling it #SPN” While many friends and clients came to know SPN, and would ask me about the quality of this week’s pie, Google never did get around to calling it #SPN.

So, goodbye then, Mum

She's gone. Leaving my lovely Dad heartbroken and leaving her family and friends bereft. There’s so many of the latter we’re having to have three services, two in the UK, one in the USA.

Fate, God, Luck? One of them delivered a death was instant and without pain to end a life that, even when she was in her darkest places, bought joy by the truckload to people all over the world.

I miss her stupid jokes, her chuckle, her habit of launching into Shakespeare, Latin or song to illustrate her point and I miss her cuddles.

I'm proud that Marilyn Joy Payne will continue to influence the way we do business.