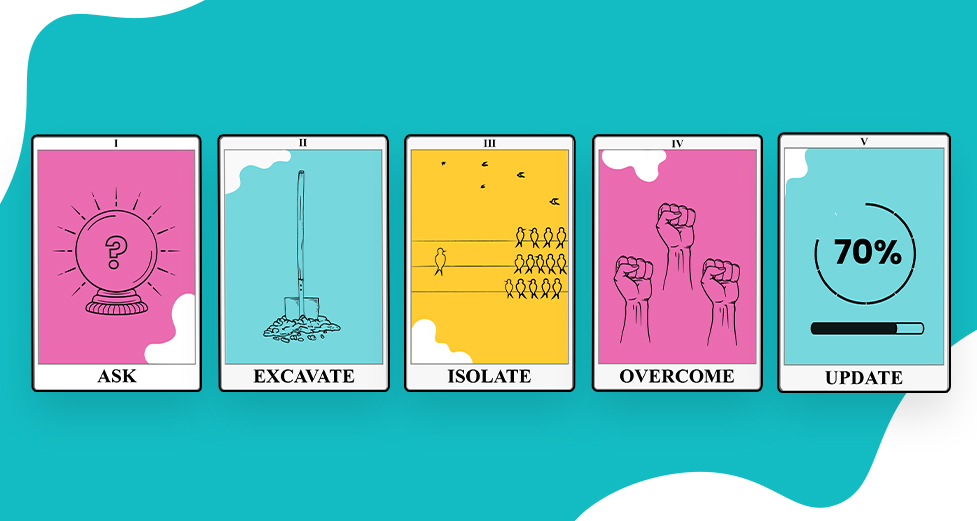 You’re just about to close a deal and you hear the words “it’s too expensive”.  DON’T PANIC! Follow this easy AEIOU framework to stay calm and overcome objections: 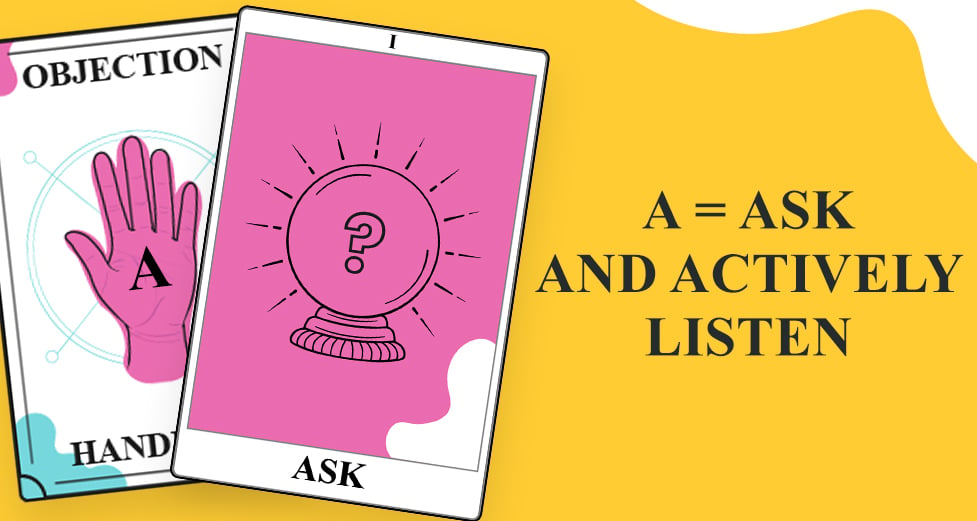 A = Ask And Actively Listen

As a smart negotiator you already know that the person asking questions is the person in control of the conversation. Lean on that skill and, the other key pillar of your sales career, active listening.

When you hear an objection at what you thought was the end of a deal, you need to quickly change your approach and, if you’re anything like me, your attitude. You won’t help yourself by forgetting your manners - by asking a reflective question, you’ll buy yourself some time:

I’ve used reflective questioning in this instance so many times, it’s become a habit. It helps one to slow down and get into a different headspace. If you’re really lucky - your prospect will quickly follow up with why they think “it’s too expensive”.

It’s very tempting to try to handle that feedback immediately but this is rarely the best course of action. If you’re going to handle any objections properly, you need to spend time with your prospect. This means that the next question you’ll want to ask is to gain permission to dig into that objection.

You’re in sales so lets get assumptive about this and assume that the objection is something your customer actually wants to overcome - I usually say something along the lines of “OK - I’m interested as to why you feel that way and I’d like to explore some ways in which we can figure this out  - do you have some time now or shall I schedule something for tomorrow?”

“Now or tomorrow” NEVER “next week” OR “next month”. If the prospect is serious about buying what you’re selling - they’ll try to squeeze something in. If your prospect pushes back for a later date, it’s a big warning sign that your timelines aren’t aligned and this is unlikely to be their only objection. Even more of a reason to slow down, you should be working to their timelines - not yours! 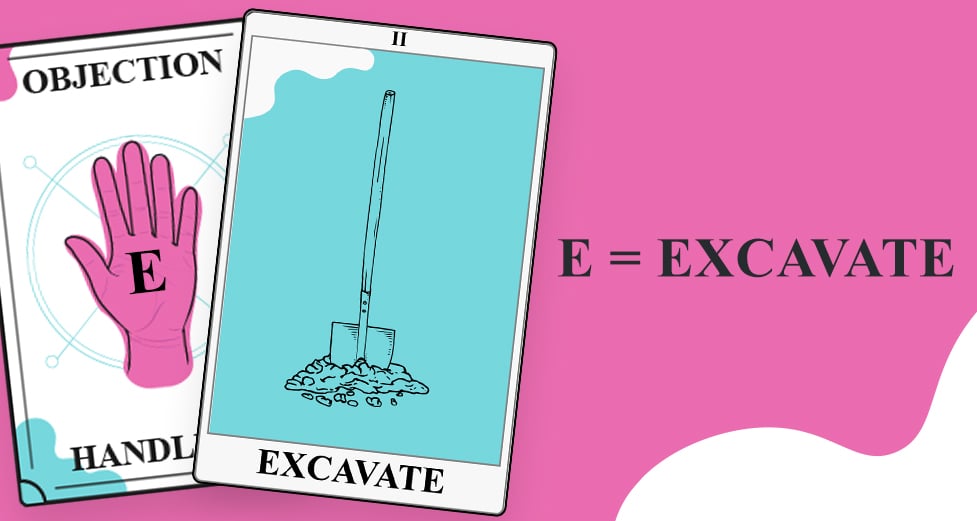 Often objections are buried in lots of less important verbiage - you’re a nice person and your prospect doesn’t want to upset you, so they often tell you what you want to hear, not what they actually want to say. So on the call, after a quick recap, you must continue asking and listening but with laser focus. You’re going to excavate all around the objection, so you and the prospect can see it from all angles.

“You said yesterday that the solution is too expensive. What makes you say that?” - often this one question uncovers that the prospect thinks it’s great value but they just don’t have enough in their budget. Sure, this is a problem but price is rarely an insurmountable problem. If the budget’s too small ask a quick tie down question like “oh, but if you had a bigger budget you’d go ahead right now?”, “If I can fix that, what else needs to change to make this work for you?” 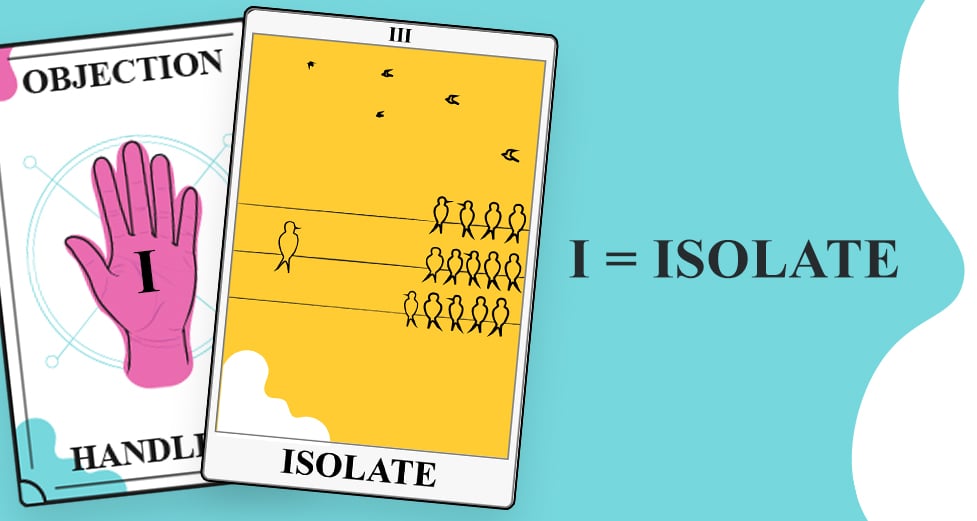 Ever been in the position where you think you’ve handled all the objections but suddenly the prospect mentions “a deal-breaker” out of the blue?  Isolating the individual objections you’ve excavated helps avoid that situation. Sometimes it’s good to deliver a list of the isolated objections and throw in a made up one at the end of the list. For example - “So if we can solve X, Y and Z - who else do we need to get onboard to get an agreement today?”

Repeating the objections back in this way effectively isolates them as separate objections, confirms timescales and, because you threw in an extra potential objection related to authority, helps you ensure you’re not going to be side swiped by the “I just need to get sign off from the board” objection at the last minute. Now you can begin to prioritise the objections, in order of importance to the prospect.

Think about a zip. At one end it’s all nice and easy to do up but the other end is really wide apart. As you draw the zip along, everything comes together easily and eventually even the two sides that were very wide apart join up with very little effort. Overcoming objections using the same principals is a great way to find common ground. In the previous step you listed the objections by importance for the prospect. Now you must do the same for yourself. Examine the lists and see where you and your prospect’s positions are closest together - start here. Once you’ve found a win/win position on the easiest objection - move on to the next easiest, and repeat until you’ve come to the last one. There’s proper psychology behind it but I always use the phrase “lots of little yeses add up to the big YES!” - if you and your prospect have agreed on 4 out of 5 objections, then you’ll both be motivated to find a way to make that final difficult one work.

A note on overcoming price objections: if the prospect is on the verge of walking away from the deal because the price is a real problem, don’t discount without removing something from your side of the table. “Oh, so the price isn’t right? You want a discount? How about then I take away A, B and C and then it meets your price requirements.” Sometimes, the psychology of scarcity says they’ll want what you’ve “taken away” from them and you can move them back up closer to your price. Other times, they’ll decide the new shape of the deal is fair and you can get the agreement at a discount and sometimes, it just doesn’t work for both parties. That’s how the cookie crumbles - be polite, be helpful and maybe your prospect will be back one day.

One shouldn’t work to overcome all objections because sometimes both parties can’t find a win/win and in this case you shouldn’t try to overcome the objection. There is no point in selling to a prospect at all costs, then delivering something that was never the right fit. The reputational damage this could do to your prospect, you personally and to your employer could be catastrophic - particularly in the age of online reviews. 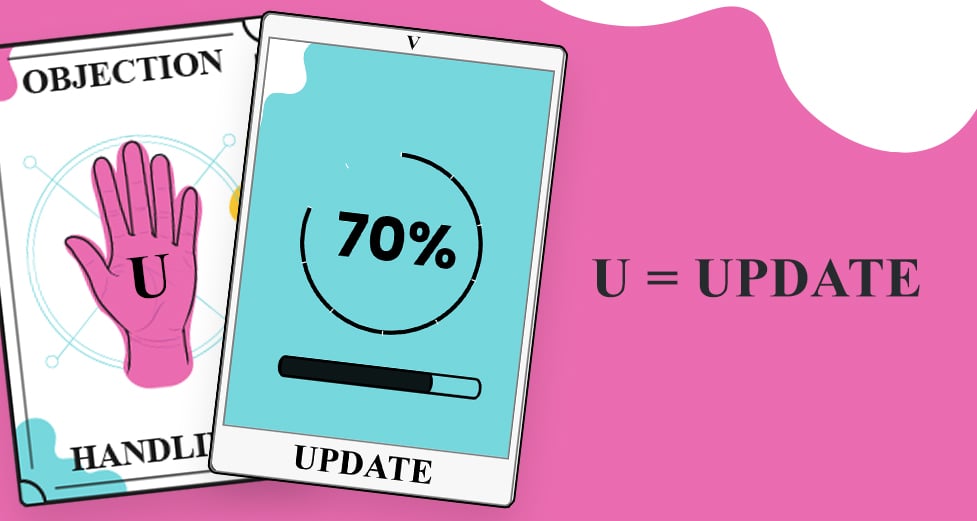 Once you’ve agreed next steps with the prospect, verbally confirm what you’ve agreed with the client and update your CRM.  You'll definitely want to confirm this in an email too but keep it short. Your prospect has invested quite a bit of time with you to overcome these objections and just like you, they’re time poor. Put your most important information at the top of the email and save all the “thanks for your time” good manners for the last paragraph.

Finally, another acronym: DAYS - Do As You Say. If you said you’d get back to them in 2 weeks, don’t do it in 3 weeks - do it in 1 or 2 weeks. As my colleague Katie Roberts says “in a competitive situation you can often win a prospect when you simply get back to them at the time you promised to - because most sales people are crap at doing that, so you stand out as someone who actually cares.”

There are other useful acronyms to use when handling objections such as:

LAARC: Listen, Acknowledge, Assess, Respond, Confirm. Kind of self explanatory and similar to the AEIOU objection handling framework, above.

LAIR: Listen, Acknowledge, Identify, Reverse - pretty awful because, as far as I can tell you just “reverse” the prospect’s objection by framing it in a positive way. That doesn’t really address their concern, you’re just saying it with a smile on your face, like a snake oil seller. Not a good look.

Anticipate And Overcome Sales Objections Early In The Sales Journey

Obviously the best way to handle objections is to not get any! Or at least if you do, they don’t surprise you right at the final stage of your sales process.

We get this done at Noisy Little Monkey by having a deep understanding of our buyer personas which we share between Marketing and Sales.

Using the context from our buyer personas we created a B2B sales pipeline template which aligns our buyers' timeline with our sales process.

Finally, we invested in a CRM that seems to actually be built for a sales force (instead of just having a clever name). It’s HubSpot Sales Pro. So much of the time sales people normally waste on admin tasks, and updating the CRM is done automatically with HubSpot - which means your sales team can focus on building relationships and creating solutions for your prospects.

Maybe you feel that documenting your buyer personas and sales pipeline would be a waste of time because all your sales team *should* know this stuff, and migrating from Salesforce to HubSpot would be too much of an undertaking. I felt the same before I finally dived in and bought my sales process into the 21st century. What I’ve found is that we anticipate and overcome sales objections much earlier in the process - so we don’t waste time and effort on business that isn’t going to fall into the closed won bucket.