Piss off, Jessops! Or, Why You Don’t Need to Buy a Fancy DSLR

I was settling down in front of the X Factor the other week (I know, not the best start to a blog post in the world) when an advert came on which quite literally made my jaw drop. And not in a good way.

There is an awful lot of consumerist crap to wade through at the end of the year. We’re being bombarded with marketing left, right and centre, being told to buy things then chastised when we’re tripping over each other in ASDA at midnight, punching people in the face to try and snag that last £150 telly.

I digress. The point I’m trying to make is that technology is no longer simply a means to make our lives easier. More and more increasingly in this digital age, tech is a status symbol. Take Beats headphones for example, they sound like crap but are shoved down our throats in every other advert on’t telly and in every pop megastar’s music videos – but does this kit actually improve your life in some way or another, or are we being tricked out of our hard earned cash when we’ve got something which does the job perfectly adequately?

The advert in question was for Jessops. I’ve already got beef with Jessops, because it was the very first job I landed at the sweet and tender age of 16, where they completely exploited me by making me instruct impatient old people how to use the self-service machines (which they were very reluctant to do), and only paying me an hourly wage equivalent to the price of a Big Mac.

In this particular slice of festive joy they were beaming into my tellybox on a Saturday evening, the voice of Holly Willoughby was telling me “a photo captures a moment to remember… or at least it should do”, adding a negative intonation at the end like your mum telling you off for not remembering your grandma’s birthday, as the happy couple on the screen look lamentingly at their photos with captions like ‘Jack’s first birthday – blurred image’ and ‘Honeymoon – not enough zoom’. Holly then reminds me that it’s worth buying “a quality camera from Jessops”, and that they’ve got some cracking deals for Christmas. Gee, thanks Holls.

I am enraged by this advert for several reasons.
The terminology to describe these common imaging problems annoys me. It’s spectacularly patronising. Photography isn’t as complicated and scary as people assume, and yet this advert is metaphorically patting the viewer on the head in a way as to suggest “There there you clueless moron, it’s not your fault you don’t know how to use your camera properly. You’d better pop down to one of our stores so we can completely brainwash you with ill-informed technical bullshit and sell you an expensive camera you probably don’t need”
This takes me on to my next problem - this advert is completely nonsensical.

Spending a fortune on camera equipment isn’t going to immediately going to make you a better photographer. It’s like joining the gym, never going and wondering why you’re not losing any weight. This chap (and his fugly website) explains his problems with people using their DSLRs as a point and shoot, which I can relate to. Next time you’re in Bath, walking past the abbey, have a peep at the tourists and see how many have their DSLRs on auto. It’s not that your average Jessops-going, amateur-weekend-photographer/blogger isn’t entitled to a DSLR, it’s just that a point and shoot would be doing the job perfectly adequately.

It goes back to this whole ‘status symbol’ malarkey. Increasingly, over the last few years, more and more people have been spending their hard-earned cash on DSLRs that they have no idea how to use, because a) they wrongly assume that it will instantly make their images better, and b) it looks cool hanging round your neck, like the whole Paris Hilton Frappuccino and chihuahua craze circa 2004. Photography 101 website PetaPixel claims that 65% of people aged 18-29 consider their DSLR a status symbol, and two thirds of casual photographers rarely take their fancy new camera out of full auto mode.

OK, so this article is a couple of years old, but I still believe the epidemic is ongoing. At the same time as this was written, the clever marketing people at Sony Australia were running a series of adverts called ‘DSLR gear, no idea’ poking fun at the casual DSLR user and highlighting a few particular photographic personalities, including a couple which I’m sure we’ve all witnessed at some point or another. Watch the full campaign below, and have a good ol’ chuckle.

I know what you’re thinking – who dafuq are you? What authority do you have on this subject? Why are you telling me off?! That Saturday boy I spoke to at Jessops the other day told me the best way to really capture my young children Tarquin and Tuppence frolicking in the snow this Christmas is to buy this £2000 DSLR because it is like, totes full frame and that’s like the best that money can buy and I should like probably get another lens and a hood and colourful handmade hemp strap so people know I mean serious business.
If you must know, I spent four years getting a degree in the subject. I also spent the last two years working full time as a product photographer for a sex toy company. It is now my job to become enraged when people think that dipping your toes in the photography pond is some kind of mad, complicated, expensive thing which you need to buy a fancy DSLR for, because it’s just not. Have a look at these photos taken on a jeffing iPhone, for crying out loud! According to this article, “A great photographer with an iPhone can take a better photo than an amateur with the latest and greatest.” 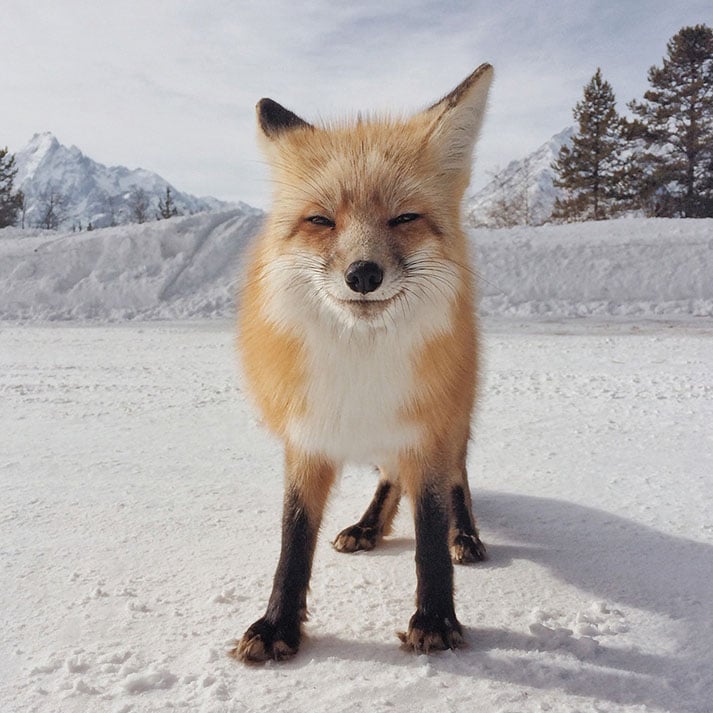 Thus, my rage with Jessops – they are treating their audience like idiots, latching on to this status-symbol-thru-tech phase we all seem to be going through at the moment, and basically instructing them to spend more money than they need to. If you’re looking for a new camera then the internet is your best friend – get an idea of the kinds of features you want it to have and trawl dpreview to see what you can get in your budget. Go forth! Experiment! Take photos on whatever you can get your hands on, but please don’t feel pressurised by Holly Willoughby to be buying needless fancy tech.

Image Credits:
• Tourists holding up the leaning tower of Pisa {Martin Parr}
• iPhone photo of a fox
• All gifs from giphy.com