Reddit (touted as the front page of the internet) is an entertainment and social news site dedicated to cats, bacon, memes and Neil deGrasse Tyson. In general it's a tool for procrastination. Areas of interest are divided into categories or ‘subreddits’ e.g. /r/Technology, /r/Funny, /r/MildlyInteresting. The top posts from these subreddits then appear on the Reddit front page.

All of the posts on Reddit are user submitted on to a bulletin board style page. Next to the posts are two arrows; an Upvote and a Downvote. The purpose of the Upvote and the Downvote is for Registered users (Redditors) to provide that post with a rank. More Upvotes = a higher page ranking. A higher page ranking means that posts are more likely to appear on the front page. Basically it’s similar to Facebook accept with a ‘dislike button’, which frankly is what Facebook really needs.

Reddit likes to provide an incentive for users to post links to quality content and make useful comments. This incentive comes in the form of Karma. To summarise, the more Upvotes for your post or your comment gives you more Karma. Karma is highly coveted by Redditors, but in essence Karma is just worthless internet points. Karma does however serve as a good indicator of content quality.

IAmA / AMA (I Am A or Ask Me Anything) is a subreddit dedicated to text posts or ‘self-posts’ which act as a kind of online interview. For example Barrack Obama during his re-election campaign held an AMA. The leader of the free world simply posted ‘I am Barack Obama, President of the United States -- AMA’. This went on to become the 6th most Upvoted post on Reddit history. Chris Hadfield, Snoop Lion and Danny Boyle have all also done AMA’s.

Proper Redditors (as opposed to ‘lurkers’ = unregistered) can be some of the most witty, intelligent and verbose individuals you’ll find on the web. Engineers, doctors, astronauts, professors and comedians, as well as users from all walks of life make up the greater Reddit community. All of these users share a common reddiquette, a Reddit ethos that helps to create and promote a real sense of community.

What do you dislike?

When it comes to parts of Reddit, Obi Wan Kenobi said it best “Never will you find a more retched hive of scum and villainy” (accept maybe 4chan). Basically, many people on Reddit are dicks. Whilst there are incredibly erudite and learned individuals on Reddit, there are some pretty vile, whiny and abusive users/trolls and subreddits that aren't really worth mentioning. However in saying this, how is Reddit different to anywhere else on the web?

Browsing and navigating Reddit in its base format can be a bit tricky. Looking at pictures, posts and comment threads can be difficult without constantly opening a new tab or navigating away from the page you were just on. Extensions like RES (Reddit Enhancement Suite) or at the very least Hover Zoom are a must for Reddit.

Is it good for Business?

Unfortunately the nature of Reddit and its shared ethos means that it is absurdly unforgiving and often just vindictive. Many time’s Reddit and its users have reacted badly to thinly veiled attempts of promotion. An example of this would be Morgan Freeman’s supposed AMA, although styled as a candid AMA it turned out to be a poor attempt at promoting the new film Oblivion (his user name was subtly named OblivionMovie, Good job PR team!)

However promotion isn't impossible on Reddit. Here’s an example of an AMA done the right way. The business owners conduct a really sincere and honest AMA, answering all questions candidly and honestly and even go as far as giving Redditors coupon codes for their product.

If done well Reddit can be an incredibly useful tool for outreach. The fact that Reddit is split up into niche subreddits means you’re instantly in touch with your demographic or user group. If your business thrives on interaction and gaining quality feedback, then Reddit is an awesome weapon to have in your social media marketing arsenal. Whether you’re in engineering or agriculture there will most definitely be a subreddit that caters to your audience. 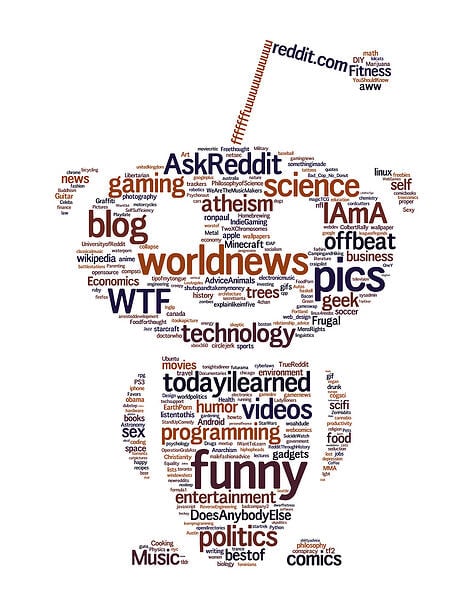 Reddit is also a pretty good trend aggregator. The nature of the ranking system within Reddit means that the best/funniest topical content is always at the top of the home page. If you’re looking to keep your fingers on the pulse of internet and catch good viral content before it goes mainstream, then Reddit is your best bet.