They say that Christmas comes but once a year, but for SEOs it comes thrice (you'll get what I mean in a minute, just bear with me)

Last Friday Natasha, Lily and myself moseyed on down to sunny ol' Brighton for the first #BrightonSEO event of the year (second event is in September time, soooo both the April and September events are the other Christmases I was on about...? #UnwieldyMetaphor).

The two day conference played host to around 2000 of the UK's best and brightest search marketers and featured some top talks including head-liners such as Google engineer Gary Illyes and some Australian SEO chap who won The Apprentice.

If you weren't able to get yourself some tickets or just plum forgot about this free SEO fest, you're in luck as I've put together my 3 top takeaways. It'll be like you were actually there with us (except you won't have had the tasty enchiladas me and Lils had for lunch...)

1. Buy A Brighton SEO Members Band (It's Totally Worth It)

While not the most fashionable accessory out there, investing in a purple members band is kind of a must.

The free conference tickets always run out way too quickly. Picking up a "members" ticket will set you back £30 but will guarantee you entry and you won't have to fight it out for tickets or twiddle your thumbs sitting on that infernal waiting list.

The members band comes with a free t-shirt (here's Jon seductively sporting his free T), generic beverage token, members wifi, sweets, and a Styrofoam plane. All of that stuff is clearly worth £50+ right?

Best of all though these bands give you the right to queue jump past all of your fellow SEOs. The smaller stages have some awesome talks but sadly only have room for a small audience, so if you're not in line first, you're probably not getting a seat. Buuutt, if you have one of these nifty festival type wrist bands, you get priority seating and can saunter your way straight in 10 minutes before everyone else. When people tutt at you for cutting in line to claim your pew, you can simply point at your wrist band and smugly quote Ron Burgundy. 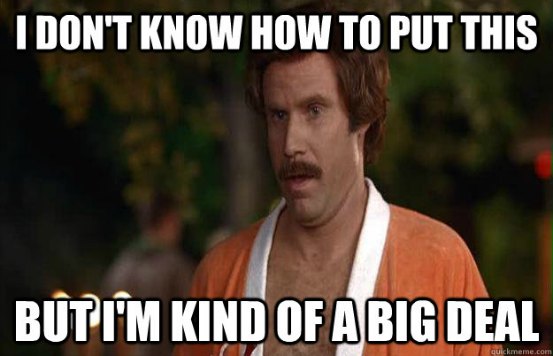 2. Mobile Madness Is Nigh

The first talk I had the pleasure of listening to was from Google Switzerland's Webmaster Trends Analyst, Gary Illyes. Gary waxed lyrical on "Wearables, Mobile, and the Internet as we Know it". In his talk Gary let loose some new info on how Google is pushing to increasingly index more apps to help return more relevant results in mobile SERPs (<-- Basically if you have an app, MAKE SURE IT'S INDEXED!).

Gary also posed the question (in a cool Swiss accent I might add), "Which is better - native app or mobile site?", the answer to which he emphatically responded, "No". What Gary went on to say is that there is no right answer, you need to figure out what's best for your users. For example, will your users benefit from offline accessibility?

Gary also gave us some insight into the upcoming algo update on April 21st and that basically, the whole thing is kind of a big experiment. Currently Google don't have the infrastructure in place to create a separate mobile index; they might one day (read: definitely will!), but for now they're pushing this out just to see what happens.

Some clever clogs asked Gary whether there will be any ramifications to Google My Business results in mobile SERPs if your site happens to be poorly optimised for mobile. The answer was a resounding "non", as Google My Business utilises an entirely separate index. Good news if you've spent aeons perfecting you Google Local/My Business presence and reviews.

It's also worth adding that #Mobilegeddon isn't going to be as horrendous as the hash tag suggests. The update will only be affecting Google's core web search on social (the 10 blue links in SERPs), Images, News, "the local 7", Videos etc. won't be affected in the slightest. Phew...

The next talk was kind of hard for me to watch, as it was communicated entirely using nerdy film references, which of course I hated... Who am I kidding, it was awesome and was hands down my favourite talk of the day.

In his talk, Texan search savant Greg Gifford delivered a whopping 125 slides in a mere 20 minutes! Each slide was illustrated by a Sci-Fi film from the last 50 years, and his opening gambit was bellowing "don't even bother taking notes, you won't keep up".

Greg churned out some knowledge which was already pretty boilerplate at NLM, which is always refreshingly reassuring and it's quite nice to give yourself a pat on the back. Additionally I was delighted by some real nuggets of Local Search gold in his consciousness stream... If you're not already doing this, have a look at some of Greg's local pointers:

Optimizing your title tags, H1s, Page Content, Alt Text, URLs and Metas so that they all contain the locality's name. The importance of schema mark-up, consistent NAP (Name, Address, Phone no.) relevant and regular blogging etc.

Greg also touched on the importance of citation signals, namely you need to clean-up every single citation you have or have ever had. In a nutshell, incorrect or duplicate information about your business is sending a really bad signal to Google.

I could rant on about Greg's deliciously nerdy slides for ages, but you're probably better off just seeing them for yourself.

I learned a heap from this year's event, and as always there's way too much to fit into just one blog post, so if you get a chance just grab a ticket and go along and see it for yourself. Even if you paid 10 times the members price, it's amazing value, thanks to Kelvin's vision and ability to round up a sponsor or two.