Who Does Social Media Well?

We all have goals. I don’t mean a New Year’s resolution kind of goal. I mean #goalz. Y’know, your hair goals or your interior design goals. You might not have consciously thought about it, but chances are, you have something or someone that you aspire to be like, therefore, you have #goalz.

We’ll happily admit that we have social media goalz – no one’s perfect (though we’re not far off lul), and having been immersed into the social media sphere since my early teens, I feel like I’ve got a pretty good grasp of who’s doing social well or not.

Aside from the obvious brands that do social well: Oreo, Taco Bell, Tesco (to name a few), for the past year or so, I’ve been impressed with what what these guys have been doing...

Noisey’s page on Facebook is one that I am genuinely intrigued by. More often than not, I find myself actively liking the majority of their social posts; scrolling through the responses, even liking users’ witty comments or criticisms about the writing. The fact that they’re even getting this kind of attention is a big indication that they’re doing something right.

From observation, I believe that the key to Noisey’s engagement is…yep, you got it, knowing their personas! Their tone of voice is pretty specific; very ‘IDGAF’ and far from patronising. In fact, it's so far from patronising sometimes that it’s nearing on pretentious, but users will respond to this, because they’re being treated with a level of intelligence.

Along with their timeliness in posting, their captions are minimal, letting the quality of the posts speak for themselves.

This might strike most people as an unusual choice. How do bands do social media marketing well? Their fans worship them so their stats will always be high? There’s only so much you can do as a band online, SURELY?! Wrong.

Aside from the standard promotion of new releases, tours and vlogs of what’s going on with them, Lower Than Atlantis have explored new ideas and trends in social and succeeded in implementing these.

On Facebook, they used a 360° music video to promote their single ‘Dumb’. Not only is this a great idea because the number of musicians doing this is still small (and they’re the first band I saw doing it), but the fact that it’s 360° means you’re always missing something as you’re scrolling round. This encourages users to play the video again and again to get the full picture. I mean, the stats of the post speak for themselves really.

Something else they’re great at is using WhatsApp as a social media platform. Impressively they did this months before Drew Benvie said it was cool, and I was hesitant to believe that this would actually work, for, well, anybody. But Lower Than Atlantis proved me wrong. They initially promoted it in an “add our phone number and we’ll chat to you for a bit” kind of way, and now they've turned it into an “every now and again we’ll send you a friendly, unobtrusive reminder of how you can help support our band” kind of message. I certainly don’t get annoyed. In fact, for the teeniest tiniest amount of time, I freak out thinking that they’ve actually personally messaged me.

COME HANG OUT WITH US ON WHATSAPP. SERIOUSLY. #WORKFORIT pic.twitter.com/cncs36Stjo

The bosses. The big boys. The bad men. When it comes to targeting and getting dat engagement from millennials on social media, boy, do Innocent know how to rake in those likes. As a B2C business, they understand that you can’t just 'sell, sell, sell!' on social. You’ll get drowned out and, eventually, ignored. Instead, they’ve taken a really creative approach to their social and built up a community, one that’s willing to give up their time and converse with them.

Sure, there’ll inevitably be a post about juice. Ultimately, that’s what they do. But rather than generically showing off their sale, they’ll present their product in a really fun way.

The sales posts are rare, and when they do happen, they focus on being funny, not on trying to win money. Their caption is honest and relatable, which is why their audience likes them so much.

Simply taking hotly discussed topics, like the clocks going forward, and putting their own spin on it purely for entertainment and engagement purposes is a sure fire way to win. Plus, they’ve got brand awareness just from whacking their logo in the corner. Smashed it outta the park. 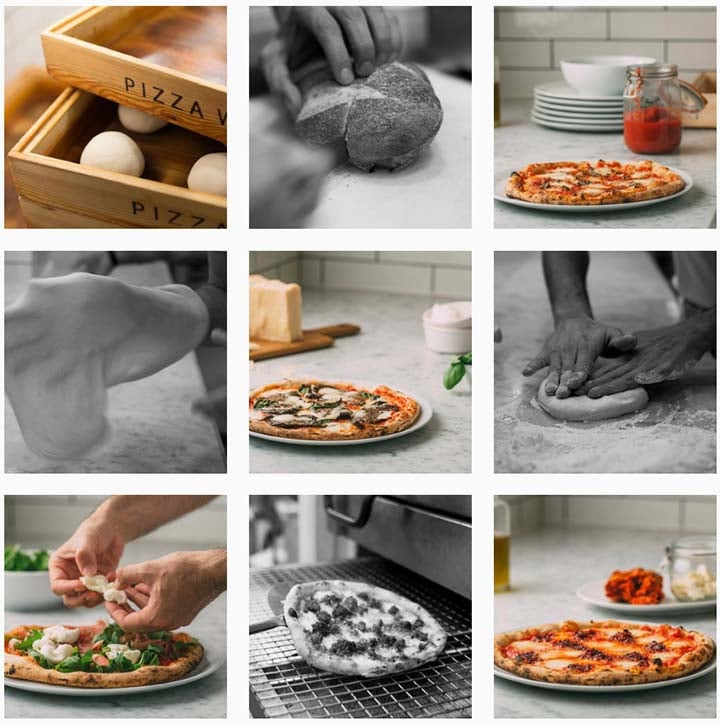 We 💜 Pizza Workshop’s Instagram. Firstly, you can’t go wrong with pizza. Secondly, LOOK AT THAT THEME. At her Digital Gaggle talk, @Porthjess, said that one of the keys to winning on the gram is with a theme. We’ve got one on ours, I’ve got one on mine and Pizza Workshop have done exactly the same; alternating between a colourful pizza picture and a grayscale pizza process picture.

What we can learn from these social accounts is that you need to really understand your audience and stand out to them somehow. How you do this is up to you: you might choose to stand out through your tone of voice, your aesthetic or by beating your competitors when it comes to trying out new and exciting things online.

Now, trying to win as well as these guys is probably going to take up some time, so why not check out this free guide which can help you manage your social media in as little time as possible?!