Noisy Little Monkey has been in existence for almost ten whole years, but it’s taken us a little while to get to where we are today. Fancy a history lesson? Good. Then we’ll begin.

Before this Jon ran a company called The Web Consultancy doing something similar to what we do today, but as a sole trader. He started the business in the back bedroom of his girlfriend Nicola’s house in Bedminster in 2007 before they moved to The Old Mill in Shepton Mallet. In The Old Mill, Jon worked on his own in a room universally known as The Dungeon. It was cold.

Sophie joined the company working part time with Jon, drying his tears and generally trying to organise him. Around this time Casey started to work for us as a freelancer in between being a mum. We also worked with other wonderful freelance ladies including Kate and Charlie.

Nic had been working for Noisy Little Monkey on Fridays for a while before joining full time in the September of this year. It was 2010 when Nicola first began to understand Jon's relaxed attitude towards bookkeeping and saving for the tax bill. What with paying back taxes and getting married, it was an expensive year for Nic and Jon. They also argued quite a lot.

We took on our first real employee: Matt. In addition to coordinating freelance staff, suddenly we were propelled into payroll, HR policies and real business stuff. Employing Matt meant Nic and Jon could also take a day off - hurrah! They continued to argue quite a bit - boo!

Tash Turns Up. We Win Awards.

We were joined by Tash in January 2012.  Actually, she pitched up for our Christmas lunch in 2011 wearing a vintage Christmas jumper - it was love at first sight. Tash brought pictures and colour to Noisy Little Monkey, transforming how we worked.


We ran a multi award-winning digital campaign this year. The fact that Tash had joined the business around the same time is not a coincidence.

Running out of room at The Old Mill, we saw an advert for an available space at The Banana Warehouse. It seemed like fate, so we got in touch. Little did we know this was Aardman Animation’s building. We moved in with Morph in the November.

Sallyanne joined us in January 2013 after distinguishing herself at the interview by giving out chocolate.

Josh arrived in June for work experience and never really left. Josh fills our working lives with amazing trivia, is always ready to lend a hand and is just generally fabulous to be around.

Sadly Mr. Dog – an integral member of the Noisy Little Monkey team – resigned in February to enable him to spend more time at home. We really missed him.

Shortly after Mr. Dog’s departure, we got a speculative email from this guy called Steven who was hoping to move to Bristol. We invited him to lunch and, having spent a couple of hours in his company, decided he needed to be an official Monkey. Ste joined us in the May and brought a level of technical excellence and attention to detail that can never be underestimated.

At about the same time, we met Sammy Payne; a superstar in the making. Sammy was only with us for four months before her life as one half of Bristol’s most successful, world changing robotics entrepreneurs (trust me, this is happening) snatched her away. She put in the foundations of Digital Gaggle for us and will always be a Monkey.

So, how could we ever top Sammy? Lily Doble! Lily joined us in October - a photographer in her heart, Lily brought her kooky aesthetic into our lives and made us go ‘ahhhhh Lily’ on at least a daily basis. Although Lily was pulled back into her life as a photographer and blogger in 2015, she too will always be a member of the Monkey barrel.

We’d known Chris Thurling by sight for a while. But in a ‘Say Anything’ moment of recognition, we knew we needed him in our life. He rocked as our non-executive Director. Chris made Nicola and Jon argue lots more for a bit and then Nicola became the boss and the arguments died off, pretty much. Nicola being the boss is much better; for the business, for our clients, for the monkeys and for their marriage.

In retrospect 2014 was a TOUGH year. Not only were there lots of staff changes, but more than that Josh and Tash lost a very close member of their family and the wonderful Marilyn Payne – our biggest supporter and emergency receptionist – died. 2014 was a powerful reminder that life is more important than work, no matter how much you love the work.

After 2014, the only way was up right? And luckily it was. More settled, more profitable. Phew.

Natalie – also known as the Laminator - and Jo Duncan joined us in November. We weren't a perfect fit for Jo, so she left and wrote a book and started her own agency.

Thankfully Nat was, and is a fit! She is a social media native: imagine, she’s never known the world without the internet! Neopets anyone? Not only has she got a stare that will bring you to your knees, but has a brilliant visual sense and an awesome turn of social media phrase.

Towards the tail end of 2015, marketing automation software provider approached us to see sound us out to see if they could make Noisy Little Monkey a HubSpot Partner in Bristol.

We started 2016 as we meant to go on: recruiting more awesome people as Monkeys. Holly and Lucy became a part of the team in January and wowed us with their intelligence, capability and knowledge of Kayne.

Six months later, Claire joined as a Monkey and took on the full-time role of marketing and events for the business. She also took over from Sophie in organising Jon.

A few months down the line, we recruited another Clare (you can never have too many). She used to work with Nic back in the day and we knew that her super slick admin skills were the perfect addition to the Monkey family.

Less than one week into the new year, we hired James and Gertie. We chucked them in at the deep end with all sorts of client work and they flourished wonderfully.

By this point, we’d outgrown the space at Aardman Animations and so we moved to a new office in Bristol’s famous Tobacco Factory.

Sick of being a stay-at-home hound, Mr. Dog made a triumphant return too - he visits us three days a week. In June, Lucy left us - but only temporarily. She went off to have a baby monkey.

A couple of months later, we recruited Zoe and Jo to grow the power of our digital marketing team. Zoe’s knack for video and Jo’s ability to write killer copy meant that we could really ramp up the in-house capacity of the team.

We became a Gold HubSpot Partner, because our clients, like us, are awesome.

Before the year was up, we hired Angharad to help support Ste. Not only does she kill it with the SEOs, she can also whittle you a mean woodland creature if you ask her nicely.

We had a slue of successful Digital Gaggle conferences, won the Happiest Workplace Award and produced some killer digital marketing for a range of clients from a myriad of industries. Well done us!

Sadly we had some Monkeys leave us for pastures new, but luckily we hired over-sharing design diva Amy and Georgia - the intern who just wouldn't leave - to fill the holes in our hearts.

2019 got off to a whirlwind start - and it's the gift that keeps on giving!

A highlight so far has been the hiring of Katie: the new Biz Dev bod who will help us drive even more growth in the future.

We are working with some incredibly interesting clients and have the best team lineup so far. 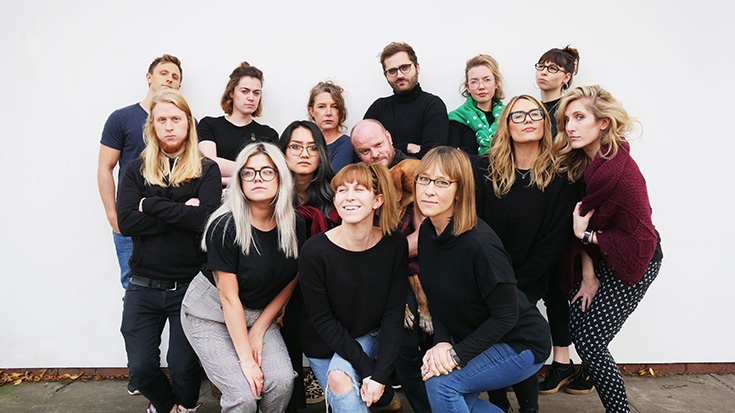